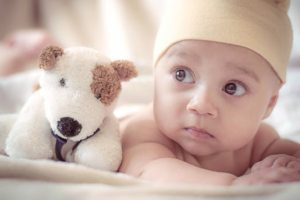 Dogs and children seem to be the perfect pairing. Both love to run, play, share height restrictions, have an abundance of energy and neither of them pay rent. Yet, out of the estimated 368,245 treated dog bites reported in 2001, the Centers for Disease Control and Prevention calculates that the highest injury rate occurred for children between ages of 5 and 9. Controlling aggression requires training both your dog and your children.

At NuVet Labs, pet health and safety is our passion. This is why we want to share the below information to help keep your two-legged and four-legged children safe.

Roots of Aggression Towards Children

Even the sweetest, most gentle family pet is capable of biting. It’s a natural defense mechanism for animals, even domesticated ones.

Dogs that aren’t properly socialized by four months of age may not react well to children. Their movements, voices and even their sizes are different from adults. A dog that is not socialized may not make the connection that kids are simply smaller humans.

Kids also behave unpredictably around dogs. When children see furry canines, they tend to get excited and want rush play with dog. When excited, they’re less aware of boundaries and their sudden movements may startle a dog.

A child may approach a dog as he eats or plays with a toy, making the dog think he has to guard his “valuable.” Children are also known to poke, pull and jump all over dogs like they’re inanimate stuffed animals. Unfortunately, dogs do respond to discomfort and fear, often with a snap or a bite.

Supervising your child’s interactions with your – or any – dog allows you to intervene if something goes awry. Keep a close eye on your child to be aware of the below potential signs of aggression.

A general progression of agitation in a normally non-aggressive dog is often:

Stopping what he’s doing, sometimes along with a hard stare at the child

Working with Your Dog

Basic obedience training is essential for any dog. When you can ask for and immediately receive a command, you hold the key to diffusing a tense situation.

If your canine companion does not catch on to commands immediately, a tasty treat can be a good incentive to help motive him. Once Fido follows the commands ten times in a row, with the treat as an incentive, you can move on to only using praise or affection to show him that he is doing well.

Don’t be Afraid to Ask a Professional

Always receive help from a professional when working to correct aggressive tendencies in dogs. A professional will be able to outline a training routine that will help correct the type of aggression your dog is expressing and teach you how to implement the training tools correctly.

One training tool, recommended by the ASPCA, is the “Statue Game.” The “Statue Game” can be used to teach your dog proper interactions with kids. The kids will “go crazy” until you say “freeze.” When they stop, ask your dog to sit and then reward him. As he learns the game, he’ll sit whenever the movement stops.

Working with Your Kids

A child who understands how to interact with dogs is safer in their presence. Always require your kids to ask permission before petting a dog they don’t know. Never allow them to reach through a fence or window to pet a dog.

Teach them how to properly pet a dog using a stuffed animal and instruct them to leave a dog alone when he starts to show signs of aggression or agitation. As they get older, explain to them why poking, pulling and rough-housing with dogs is unacceptable.