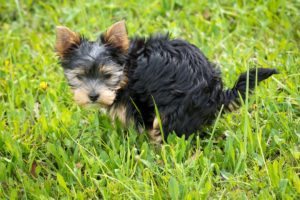 House training your puppy is a necessity. No one wants a pet who eliminates wherever they want. Although dogs can be potty trained at any age, the earlier it’s done, the sooner you’ll see success.

The one exception to this is puppies under 12 weeks of age. This is because they have little to no control over their bladders. You can begin training with your puppy before he’s 12 weeks, but anticipate more accidents during this time.

Preparation begins even before your puppy comes home. Create a plan based on your lifestyle and living situation, then purchase the supplies you need.

Unless someone will be home with the puppy all day, you’ll need to keep him in a safe, designated area. You can use a crate, a room with a closed door, or section off an area with a baby gate.

If you’re using a room of the house, be sure it has bare floors rather than carpeting or rugs so accidents don’t get soaked up while you’re away. Remove any items the puppy could chew on or get caught up in, including window blind cords and electrical wires. Puppy pads are recommended in this situation.

If you’re going to crate train your puppy, decide what size crate you want to purchase. Do you want to purchase a crate that fits him now, or one he will grow into? A non-house trained puppy should have just enough room inside the crate to stand up, turn around and lie down.

The rule of thumb is to get a crate one-and-a-half times the length of the dog from his nose to the start of his tail. However, if you know your puppy will be much larger when full-grown, you can begin with a crate big enough for his adult size as long as you can attach partitions that will limit his access to the appropriate amount of space.

Leave the bottom of the crate bare. Puppies normally will not lie in their own urine. Therefore, limit the space in the crate to the room he needs to sleep, with nothing absorbent to pee on.

No matter the method you choose for house training, the most important and abundant supply you’ll need is patience.

Several rules of thumb will help you through the house training process.

Dogs respond well to structure. Create a routine for house training. No matter your schedule, try to stick as closely to the routine as possible every day.

Begin each morning with a trip outside on the leash. Give your puppy 5 minutes to eliminate. Immediately upon finishing – not before so you don’t startle him – praise him for it. Remain outside for another 10 minutes to ensure he empties his bladder and bowels completely.

Puppies don’t always totally eliminate in one squatting. If you bring him inside immediately after going, he will learn to hold it just to get more time outside.

If your puppy doesn’t go in the first 5 minutes, bring him back inside. Once inside, confine him in his crate, a small penned-in area or tether him to you with constant supervision. Continue to take him outside on leash every 15 to 30 minutes until you get a successful elimination, as described above.

After the extra 10 minutes, come back inside and give the puppy supervised “free time” for 10 to 30 minutes.

When the puppy has developed manners in the house – not chewing on items or jumping on furniture – you can drop the leash to the floor and allow the dog to follow you around. Grabbing the leash if the puppy acts up or tries to wander off still gives you control over his actions.

3.Before and After Breakfast

Take him out again to go potty before you feed him breakfast. If he doesn’t go in the first 5 minutes, feed him in his crate or confined area to keep an eye on him.

Don’t give him more than 10 to 20 minutes to eat and drink, then take him outside immediately after he’s done. The additional 10 minutes is especially important after eating, even though he’ll likely relieve himself very quickly after a meal.

4.Getting Ready for Your Day

Bring him back inside as you get ready for your day, keeping him tethered to a heavy object in your view. Take him outside again after this resting period.

If you don’t get a successful elimination, bring him back in and confine him while you finish getting ready. Try one more trip outside before beginning your day.

If you work outside of the home and the puppy will be left alone for an extended time, be sure to take him outside to eliminate and exercise him just before you leave. Then put him in his crate or confined area with a small amount of water and a toy or two for entertainment.

If you will be home with him all day, continue the routine of taking him out after resting, eating or drinking water.

If someone won’t be home within the maximum time your puppy can hold his bladder, leave puppy pads in his area. Ideally, he’ll have an enclosed area near the door you take him through when eliminating outside. Leave his crate open inside the area and puppy pads placed as close to the exit door as possible.

When you return home, immediately take your puppy outside to eliminate, and then play with him for half-an-hour in the yard. Leash him to encourage elimination before returning inside.

Give him 30 minutes of supervised free time as you change or prepare dinner.
After he eats, take him outside immediately and follow the same routine as breakfast.

The rest of the evening should feature a walk, play time, obedience training and multiple trips outside to eliminate. Pull your dog’s water bowl at least 2 hours prior to bed time and take him out immediately before putting him in his crate or pen for the night.

Although your puppy may hold his bladder until morning, be prepared for middle-of-the-night potty breaks when he’s young. If he normally begins to whine around 3 a.m. and has to eliminate, set an alarm for 2:30 a.m. and take him out before the whining starts. This will discourage a tendency to cry simply to be let out of the crate or pen.

When your puppy has consistently eliminated successfully for several days or a week, you can begin to give him the “go potty” cue when you see him squat, circle or sniff the ground, indicating his need to go.

Attach a small bell to or near the door and use the puppy’s paw to ring it before you take him out each time. Or simply use his paw to tap the door once or twice. He will learn that this behavior results in him being let outside.

Tips to Keep in Mind